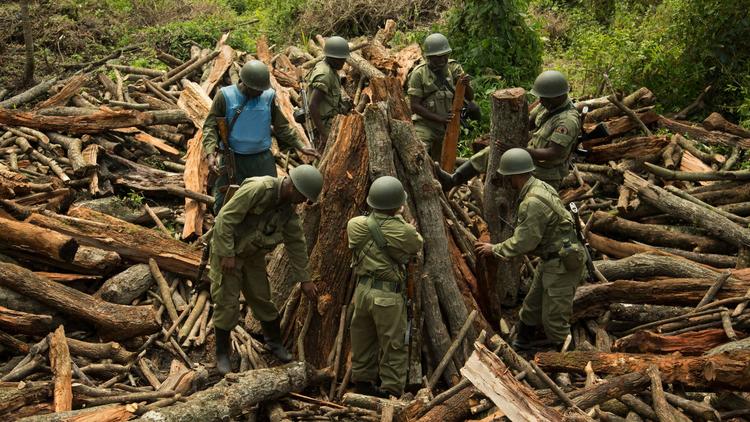 They cover a third of the world’s landmass, help to regulate the atmosphere, and offer shelter, sustenance and survival to millions of people, plants and animals.

But despite some progress, the planet’s woodlands continue to disappear on a dramatic scale.

Since 1990 the world has lost the equivalent of 1,000 football fields of forests every hour, according to World Bank development indicators from last year. That’s 1.3 million square kilometers of forest, an area larger than South Africa, according to the international financial institution.

With the observance of Earth Day on Saturday, conservationists seek to drive home the message that protection of forests is more critical than ever.

“The situation is dire,” said Orion Cruz, deputy director of forest and climate policy for Earth Day Network, an organization that grew out of the first Earth Day in 1970. “Forests are being eliminated at a very rapid rate and collectively we need to address this problem as quickly as possible. There’s still time to do this, but that time is quickly running out.”

Tropical regions are seeing the fastest loss of forests. 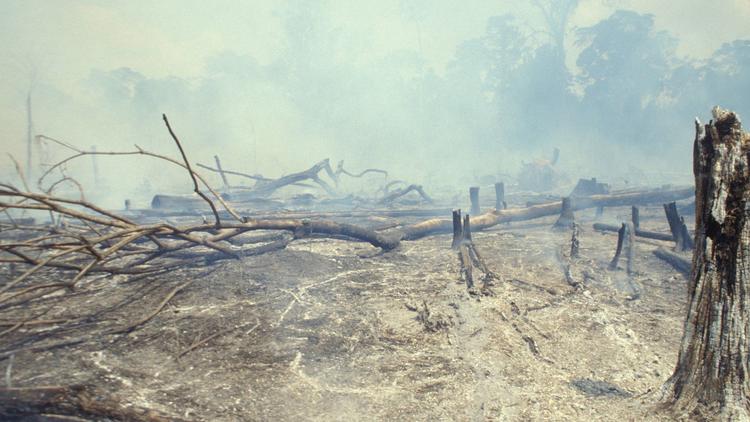 Indonesia, with its thriving paper and palm oil industries, is losing more forest than any other country. Despite a forest development moratorium, the Southeast Asian nation has lost at least 39 million acres since the last century, according to research from the University of Maryland and the World Resources Institute.

Brazil managed to reduce deforestation in the Amazon by at least 70% between 2004 and 2014 and was widely considered a success story in forest conservation, according to the World Resources Institute’s Global Forest Watch initiative.

But last year, a report by Brazil’s National Institute for Space Research, which monitors deforestation, found that between July 2015 and August 2016 aboout 2 million acres of rain forest was depleted. Experts attributed the destruction to the Brazilian government’s relaxation of environmental laws, among other reasons.

“Many people around the world are concerned about whether Brazil is going to remain dedicated to protecting its forests,” said Cruz. “I think what we’re seeing now is a backsliding.” 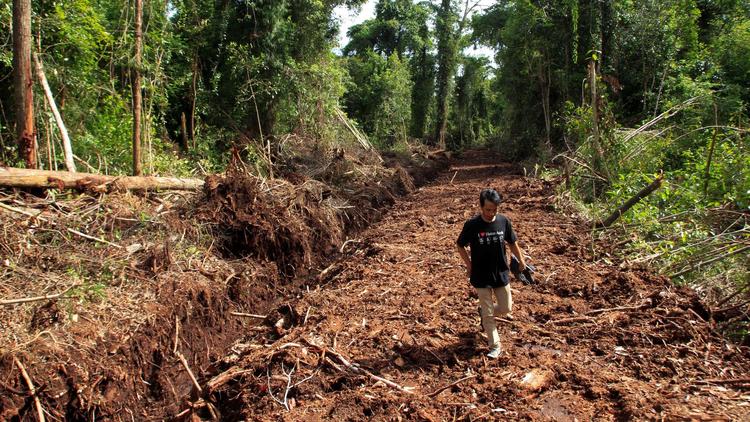 A man walks through a damaged forest area in Aceh, Indonesia, in 2016. (Junaidi Hanafiah / Anadolu Agency)

Meanwhile, forest loss is accelerating in other regions.

The greatest loss between 1990 and 2015 occurred in South America, the Caribbean and sub-Saharan Africa, according to the World Bank. A significant uptick in tree loss has been recorded in countries such as Bolivia, Paraguay and Argentina, where the depletion is offsetting any gains, according to Global Forest Watch.

The organization pointed to Paraguay as “a notable hot spot” because of expanding cattle ranching and soybean farming. Meanwhile, of the 10 countries with the fastest acceleration of tree cover loss, almost half can be found in West Africa, according to Global Forest Watch data, which cited expansion of palm oil development as a cause of the accelerated clearing of forests.

Aside from the increased demand for food, energy and minerals, the clearing of forestland for agriculture “accounts for the lion’s share of the conversion of forests,” according to the U.N. Food and Agriculture Organization. 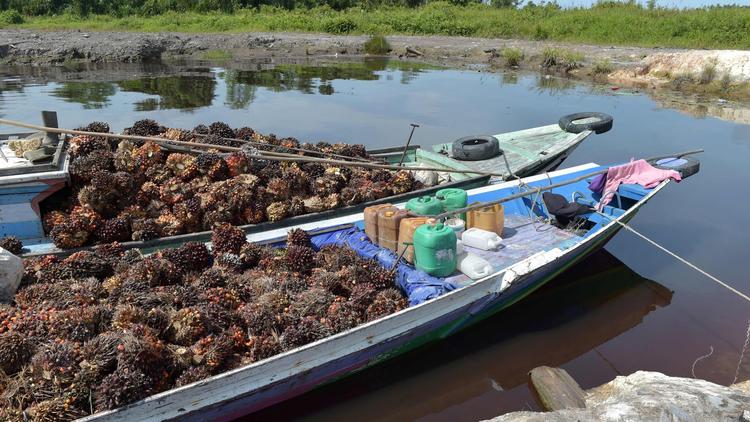 Rod Taylor, global director of the World Resources Institute’s Forests Program, underscored the role of the “death of a thousand cuts” syndrome, in which numerous small, bad things accumulate to cause the demise of forests. For example, a flourishing forest is hit by illegal logging, animals are pushed out, humans move in and this eventually leads to degradation.

New infrastructure, including roads and rail that suddenly make very remote areas much more accessible for mining, farming or settlement, is also “often the precursor to deforestation,” Taylor said.

When forests die, humans and animals feel the pain

According to the Earth Day Network, among the 1.3 billion people worldwide who live in extreme poverty (on less than $1.25 a day), forests directly contribute to 90% of their livelihoods.

“People who are most vulnerable tend to be indigenous groups and people who live in and around the forest,” said Taylor. “Often they have weak land rights. When land is grabbed or converted, they … are the people who bear the brunt of it.”

And neither is wildlife spared.

Outright forest clearance could result in the loss of species, while degradation — where a forest’s quality is compromised — could reduce species’ ability to find food and reproduce and cause potentially dangerous exposure to humans, said Amy Smith, a forestry expert with the World Wildlife Fund. 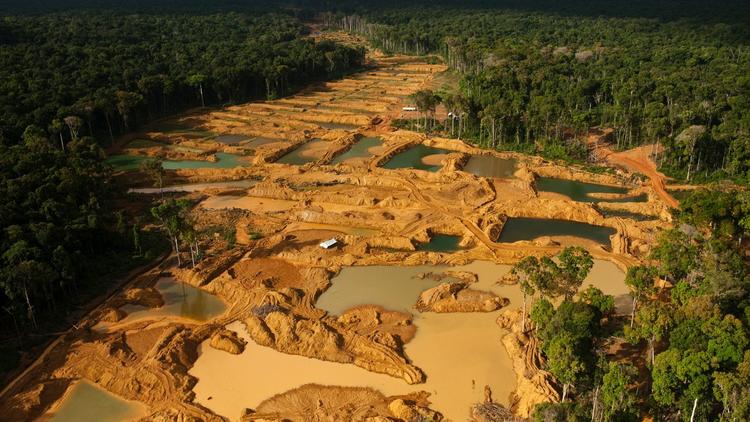 This photo from 2009 shows the effect of alluvial gold mining in a rain forest in Guyana, South America. (Pete Oxford via Conservation International)

For example, while tigers, elephants, rhinos and orangutans are feeling the effect of deforestation in Indonesia, the habitat of Amur tigers is being destroyed by the logging industry in Russia’s Far East, and alluvial gold mining in Peru’s Amazon region is threatening the environment that species such as jaguars and howler monkeys need to survive, Smith said.

Deforestation and forest degradation have caused a surge of greenhouse gases into the atmosphere, according conservationists.

Belize and Bolivia have seen their carbon emissions skyrocket in recent years as a result of increased deforestation, the World Bank reported. 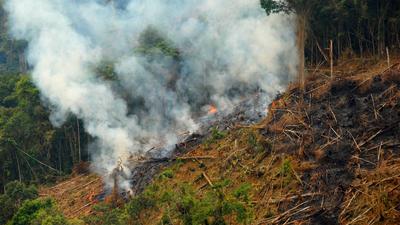 This 2011 photo taken in Bolivia shows how illegal deforestation and habitat loss are rapidly degrading ecosystems and the benefits they provide to people. (Trond Larsen via Conservation International)

“Protecting forests can give you 30% of the emissions reduction and carbon capture you need in order to keep the planet from overheating,” said M. Sanjayan, executive vice president and senior scientist at Conservation International. “The most effective way that we could spend to deal with climate change would be to spend on protecting on forests.”

But the international community is failing to step up, conservationists said.

“If you look at the $400 billion that is being spent globally to deal with emissions, only 2% of that goes towards protecting and restoring forests,” Sanjayan said. “The science is really clear that we are on a dangerous path and if the world temperature increased by more than 1.5 or 2% it would make life extraordinarily difficult for billions of people around the planet, particularly those who live along the coast. Forests give us the most efficient way we know for mitigating that.” 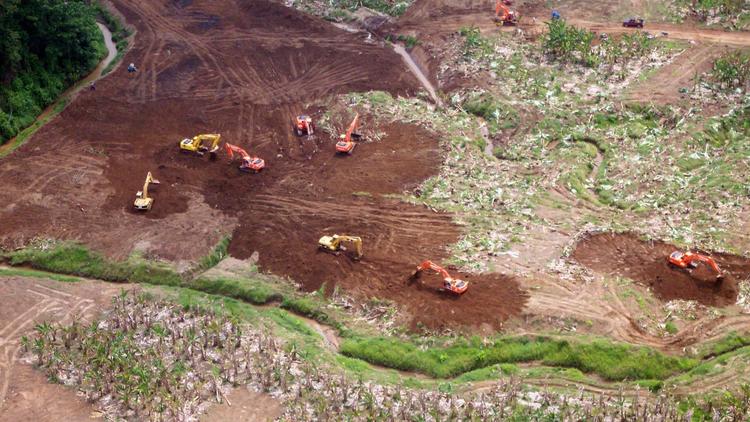 An aerial view of pineapple farmland in Costa Rica, where the industry is responsible for mass deforestation. (Conservation Federation of Costa Rica)

So what do environmentalists suggest?

“There really needs to be a multi-tiered, multi-pronged approach to this, because these are complex issues,” said Smith of WWF.

Suggested solutions from conservationists include:

— Putting pressure on global corporations to reduce and eventually eliminate deforestation from their supply chain.

— Protecting the rights of indigenous people who live in forests, because they are often viewed as being the best stewards of the land.

“If you don’t empower indigenous and local communities, financially and legally, to take care of their home, then all is lost,” said Sanjayan.